Along with its permanent collection, Athletic Club Museum regularly organises a major programme of temporary exhibitions. These are some of the most noteworthy exhibitions that AC Museoa has organised.

The children of 37 in the UK

Through this exhibition, the result of the collaboration between BCA’37 UK, BCA’37 Euskadi and Athletic Club Museoa, we pay tribute to our elders who suffered the atrocity of the war, we remember the thousands of exiled Basque children and we show our gratitude to all the people who mobilized in favor of the Basque refugees.

The exhibition also highlights an apparently minor issue, but one that played an important role for the child victims of the war: football.

100 years of the San Mamés scoreboard

In March 2021, San Mamés will have had a scoreboard showing the score during the match for 100 years.

On the occasion of this anniversary, the Athletic Club Museum is showcasing the history and evolution of the different scoreboards at the side of the Athlletic pitch, from the times when goals were recorded using pulleys to the present day, when they are equipped with the most innovative digital designs.

The history of the San Mamés scoreboard in this century is told through photographs, documents and original pieces, looking at its technical characteristics, location and various anecdotes such as the birth of the “simultaneous scoreboard” or the announcement of goals using pigeons.

With the upcoming cup finals, the museum has reorganised part of its collection to help fervent Athletic fans get the most out of these historic weeks.

The multipurpose room at the museum is hosting a temporary exhibition that brings together all the trophies won by Athletic between 1902 and 1984. These include the cups won, accompanied by original items from the games and pictures of the teams that fulfilled the dream of victory.

There are also numerous items which are not normally on public display, such as shirts, balls, gifts and pennants from rivals. All this is supplemented by information cards to enable fans to check out the club’s history in more detail at the club museum.

The exhibition is based on pieces from the museum’s collection, specifically from the José Ángel Iribar collection, and has been supplemented thanks to the selfless lending of objects by football museums that belong to federations, clubs and individuals, as well as some of the most important private collections in the world. 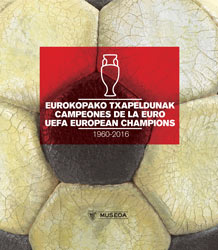 García Ergüin, the ballet of football

Exhibition of personal objects and paintings by the painter from Bilbao and distinguished member of Athletic, Iñaki García Ergüin: the series “El ballet del fútbol” (The Ballet of Football), 15 paintings that the artist painted for Athletic in 1976 and which had not previously been exhibited to the public, accompanied by the 1998 Centenary logo.

“El ballet del fútbol” is a set of 15 works designed and created for Athletic Club after the author spent a few months with our footballers in the changing room, travelling, at matches…

The last year of the old Cathedral

A review of the 100 years of activity at San Mamés, both from an architectural and a sporting point of view. Original plans, the evolution of the construction of the ground, old membership cards, tickets and match programmes, unpublished images, opponents’ kits, all of the lions and lionesses that made their debut at San Mamés, and the trophies won up to the year we bid farewell to the old Cathedral.

A season to remember

AC Museoa has set aside a small area to remember the most recent past, that of the 2011/2012 campaign. Some of the most special souvenirs of that year were included in the exhibition. A part of this exhibition was made up of images provided by supporters.

On the occasion of the 50th anniversary of his debut in our first team, a tribute to the greatest of our goalkeepers: José Ángel Iribar, ‘El Chopo’, Athletic’s ambassador and one of the greatest legends in the Club’s history. The exhibition looks back at some of the Zarautz goalkeeper’s most important moments.

Lizaso, Of Cubes and Spheres

The exhibition “De Cubos y Esferas. Homenaje a Piru Gainza” (Of Cubes and Spheres. A Tribute to Piru Gainza) by the sculptor Jesús Lizaso, shows a series of works developed for the emblematic Piru Gainza International Tournament, inspired by the legendary Athletic winger. 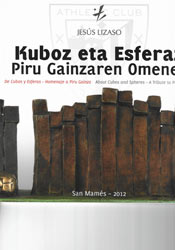 Juan Flor and Zigor Alkorta, photographers at the Museum

With the aim of showing the work of the photographers on football, Juan Flor and Zigor Alkorta were invited to present a dozen large-format images that reflect the recent years of the club’s history.

A hundred years of football cards

An retrospective exhibition looking at football cards in our country since 1911, when the first series was published. An exhibition with more than 50 full albums and 1,000 original cards.

The exhibition by Armenian painter Karapet ‘Karó’ Harutyunyan provided a new way of bringing contemporary art to Athletic supporters. It was a collection of canvases and sculptures that the artist created around football grounds. Lines that covered myriad ways and means of drawing a work of art. 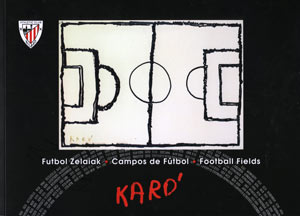 Lezama, the heart of Athletic

On the occasion of Lezama’s 40th anniversary, the Museum put on an exhibition of unpublished images of what Lezama is like and how it has worked throughout the years. It was an album full of memories that captured all of the moments, teams, trainers and training sessions that have shaped the history of this great youth academy.

An exhibition held to commemorate the 50th anniversary of the death of the first lehendakari (President of the Basque Government), José Antonio Aguirre, highlighting the most significant aspects of his time in the Athletic first team, his amateur status, his most outstanding achievements, the reason for his nickname, and the influence that football had on his political career.

The Museum wanted to pay tribute to a coach who was a key player in the club’s history, influencing and reinforcing Athletic’s style.

This monographic exhibition presented a biography of him, including his more human side, his records, his players and his training methods.

On the occasion of the 25th anniversary of the titles won by Athletic in the 1980s, an exhibition was organised with original objects belonging to the footballers who made those great feats possible, together with two audio-visual montages with previously unseen content that evoked the atmosphere of the time. 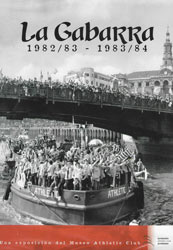 Stories of an anthem

On the occasion of the 25th anniversary of the official Athletic Club anthem, AC Museoa organised the exhibition “Historias de un himno” (Stories of an Anthem), an exhibition compiling the origins and evolution of the most significant songs that have accompanied Athletic throughout more than a century of life, and the album “Athleticen kantak – Un siglo de canciones rojiblancas” (Athletic Songs – A Hundred Years of Red-and-white Songs) was released with 15 compositions related to our team.

On the 85th anniversary of his death, Athletic Club Museoa organised a small exhibition dedicated to the legendary Athletic player Rafael Moreno, ‘Pichichi’, which included previously unseen images and different objects from his era, some of which were with him throughout his life.

An exhibition that featured the trophies and successes of the Athletic women’s team.

These were historical pieces that helped them win four titles in five seasons.

50 years since the first European Cup

On the occasion of the 50th anniversary of Athletic’s participation in the 56-57 European Cup, a small exhibition was organised to mark this event, which showed previously unseen images of the match played at San Mamés between Athletic Club and Manchester United.

To celebrate the 100th birthday of Manuel Castaños, the museum organised an exhibition that included the most important moments of his sporting life. The only living Athletic footballer from before the civil war, he was warmly honoured at the Museum.

A feeling that goes beyond football. Enter the heart of Athletic 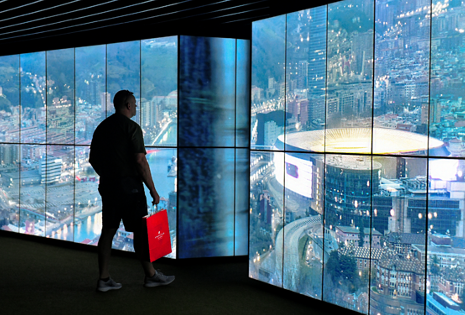 Find out about all the latest news and promotions from Athletic Club Museum and San Mamés. Sign up for the newsletter.

This website uses its own ‘cookies’ as well as those of third parties in order to offer better service and experience. You can change the 'cookies' configuration at any time. More information.